Matariki is the Māori name for the cluster of stars also known as the Pleiades. It rises in mid-winter and for many Māori, it heralds the start of a new year. Matariki literally means the ‘eyes of god’ (mata ariki) or ‘little eyes’ (mata riki).

We went to the Stardome to learn about the solar system and how Maori myths were used to interpret the stars and as an aid for navigation. 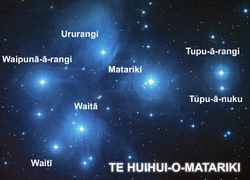 We had time to play before the serious work began and had lots of fun on the tyres and the flying fox. then it was into Stardome, where our students learned all about night, day and the seasons with a workshop led by Vanessa – an expert in Physics.

After that, they split into teams to explore the museum with an interactive I-pad quiz. We finished the day reclining in the Planetarium to investigate the universe through myths.