The netball teams of Wentworth College have got off to a good start this winter season. This year, the school is fielding a total of six netball teams, playing at North Harbour and the Hibiscus Coast.
Three teams are playing on a Saturday morning at North Harbour, under the coaching and management of Megan McKenzie and Mandy Houseman.
The first four weeks of play were grading games and Team 1 Blue won them all. Their best win was against Northcote 3 with a score of 42-19 and their toughest game was against Carmel 4, winning 33-26. After their impressive playing during grading, this team has moved up from playing in Grade 6 to Grade 4.
Team 2 Maroon has also done well in their grading games, winning three out of their four games. The team’s best win was against Waiheke 2 with a score of 27-4. This team will be playing in Grade 7.
Team 3 White has had a mixture of wins and losses during grading and the team’s performance has improved as the weeks have gone on. In the last game of grading, the team beat Northcote 6 with an impressive score of 20-6. This team will be playing in Grade 11. This team has already suffered a number of injuries early in the season and players from the Year 8 team, Sammi Ryan and Sion Jung, have stepped in to help out.
After a busy morning of netball on the North Shore, a mixed team of players are also playing at HBC Netball in the afternoon. This team has had a mixture of wins and losses so far this season.
The Year 8 team is playing on a Thursday evening at North Harbour, with Lyndal Kelly as coach and Dee Ryan as manager. This team has had a great start to the season, winning all its grading games. Their best performance was against Takapuna Normal Intermediate School, with a winning score of 20-6. After the great efforts during grading, the team was moved up into Grade 2. Phoebe Andrew has been umpiring their games.
The Year 7/8 team has been playing at HBC Netball on a Saturday morning, coached by Arwen Hulsbosch and Emma Gilpin, with Stacey Donovan as manager. Some of the players are new to netball and their skills are improving as the weeks progress. Capri Partridge has been umpiring the games.
Well done and thankyou to all the coaches, managers and umpires for the time they have put in to assist our teams, as well as the parents for their support each week on the side lines. 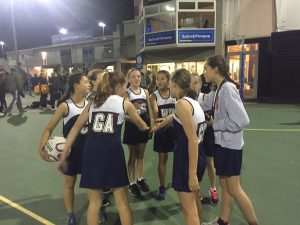 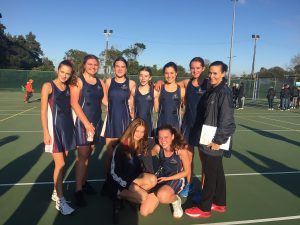 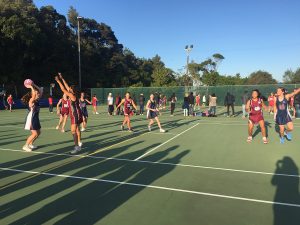