Wentworth Storm – Year 1
Yay, we scored a goal – our second since the season started so a big deal for our team!  Such a fun game in the pouring rain.  We only had 4 players owing to the weather, but they played really well together – such a team, discussing strategy as 5 year olds do as they walked between games, and calling out to each other to pass.  In the first game, we lost 4-1 to Kingsway Fire, with our wonderful goal scored by Maddie Vaudrey.  We would have scored another one but a giant puddle (small lake!) stopped the ball dead about 5cm off the line – otherwise it would have sailed in.  In the second game we lost 0-3 to ‘Fast and The Furious’.  In good spirits, the opposition loaned us a player to help balance the sides.  Caleb Gainford lost his first tooth on the pitch, so a lot of distractions as children searched for a tooth rather than chasing the ball!!  Players of the Day went to the whole team – Caleb Gainford, Ophelia Cooke, Lewis West and Maddie Vaudrey – for playing whilst soaking wet without complaining and for working together.  These kids are fearless! 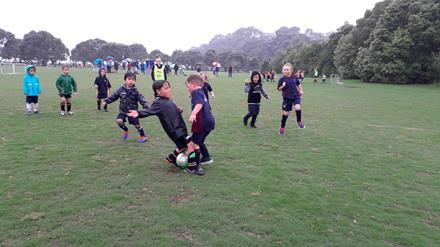 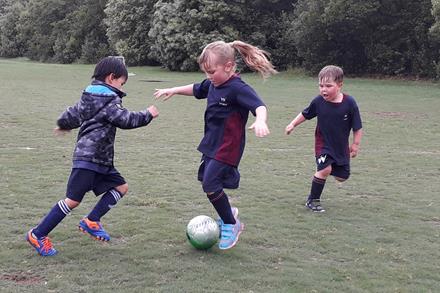 Wentworth Warriors – Years 1 & 2
Five brave Wentworth Warriors turned up on Monday afternoon last week despite heavy rain and strong winds! Elsa, Ezrah, Charles, Jacob and Theo all deserve to be named Players of the Day as with only five players they all had to be on the pitch constantly as we had no subs. They demonstrated great stamina and enthusiasm, even when playing in tough conditions.
Due to the weather our first opponent, Orewa North Stormers, didn’t turn up so we were awarded a point by default. Buzzing with energy, the Warriors went on to play a friendly game with Orewa Primary and won 1-0 after Jacob scored the winning goal. The whole team showed great progress by spreading out, passing effectively and making sure defence was always covered.
Our second match was again the Red Beach Barons who benefited from a couple of years of winter soccer training and a number of subs. The score was 5-0 to the Barons. The Warriors continued strongly, not put off and gave their all until the end of the match, demonstrating great resilience and team spirit.
Charles was awarded Player of the Day for attending all matches and showing great effort and enthusiasm all Term.

Wentworth Magpies – Years 3 & 4
Even with the shocking weather we had a full team last Monday; well done everyone.  Due to our awesome sportsmanship a couple of our players joined the other team as they were short.  We lost both games 3-1 and 5-1 with Ethan scoring both goals for the Magpies.  Well done Ethan.
Isabella won Player of the Day for her awesome defence and strong delivery as striker.
A very wet and wild soccer afternoon.  We are very proud of the teamwork and continuous improvement this team is showing.  The most important thing is they really enjoy it.  If only we could have 5 strikers on the team every week!

THANK YOU so much to those who braved the terrible weather last Monday.  It was great to see the enthusiasm of the children.  These games marked the end of the competition round for us, and it was always going to be a tough ask as we had the top two teams to play.  You all played well and never gave up which is always pleasing to watch.
A special thank you to Sandra Oliver for her team talks of encouragement, knowing the rules and being their each Monday to support the children.   Also a big thank you to the parents who helped to set up the goals each week to ensure we could start our games on time.  Thanks also to our parent side line who clapped and cheered us on each week.
Player of the Day was Amy Akehurst.

Wentworth Storm – Year 1
In our first game against Silverdale Sting, our team lost 9-0 and in the second game against Orewa United FC, we lost 8-0.  Undeterred and cheerful in the face of defeat, our Year 1 team continue to play with enthusiasm and determination.  It was a high energy performance.  Player of the Day went to Caleb Gainford for consistently good play, some good defending where he saved 2 goals, always organising his team mates, and always chasing the ball.

Training is run at lunchtimes on Mondays for Years 1 & 2.

Wentworth Warriors – Years 1 & 2
WW Warriors 1 Orewa North Strikers 0
The Warriors are growing in confidence and it was the girls turn to shine on the pitch at their last game. Selena, Elsa and Chloe put in some great tackles and headed for goal. Jacob and Timofei worked hard to get the ball into space and find their team mates. Ezrah came close to scoring and good team work found Jacob in space. He sent the ball flying into the goal. The side line supporters had some tense moments as the Warriors ran hard to win their first game.
WW Warriors 1 The Grey Sharks 1
Both teams were evenly matched and, fuelled by our afternoon tea (thank you Ezrah’s Dad and Charles’ Mum), the Warriors were running end to end with both teams sending goals wide. The referee deserves a special mention – he coached both sides and kept the game fun and friendly. A great set of passes from the back found their way to Jacob who dodged the defender and powered the ball into the back of the net. The Sharks came at the Warriors in the 2nd half with lots of shots on goal. The girls once again showed their tackling skills and Charles and Ezrah ran their legs off covered the pitch. The Sharks scored late into the game.  Our amazing ‘Sideline Support Crew’ voted Selena Woolsey as Player of the Day for her tireless running and fearless tackling.
Trainings are run at lunchtimes on Mondays for Years 1 & 2.

Wentworth Dragons – Years 3 & 4
Wentworth Dragons keep on growing as a team. They played really well in what turned out to be a nail-biting game against Stella City. Score was 0-0.
Our second game of the day against Stanmore Bay Avengers was more of a breeze for them. They won 4-1. Goal scorers were Alex and Aston. It was a great effort from the entire team with good strikers and defense and passes that paid off. Alex was Player of the Day.

Trainings are run at lunchtimes on Friday’s for Years 3 & 4.

Wentworth Magpies – Years 3 & 4
What a night!  The team were fabulous last night. They are so motivated and eager!  We lost the first game to the Orewa Chargers 4-0 but won the second game to Orewa North 2-1 with Luca and Ethan scoring goals. Luca was Player of the Day for his awesome attack, great field play and scoring the winning goal.  Well done to everyone.  We also had the opportunity to have a picnic dinner with some of the other primary soccer families at the park.  It was good to catch up and let the kids have some play time.
Trainings are run at lunchtimes on Friday’s for Years 3 & 4.