On Sunday night, this was the final Flippa Ball game for the Year 6 players in the Years 5/6 team. We wish Benjamin Rist, Elijah Kirkpatrick, Hikari Nishihara and Amy Akehurst all the best for their possible transition to Water Polo next year. The Warriors started the game pretty slowly, but by the 2nd half things started to click and more goals began to come our way. The final score was 10-3 to the Warriors. Congratulations to this team who had not lost a game this term and came first in the Term 2 competition. The whole team was named Player of the Day for having an outstanding season.

The Marlins were playing in the final for 1st place on Sunday evening. It was a frantic game with the ball moving quickly from one end of the pool to the other. Neither team was prepared to give ground and fought hard to retain the ball. We drew with this team earlier in the season and drew again in the final with a 1-1 draw. Rather than have a penalty shoot-out both teams agreed that they would share the victory, so both teams came 1st. Player of the Day went to the whole team for a brilliant game.

The Warriors completely dominated this game on Sunday evening. The team invited Alex of the Marlin’s to join them to see some of the differences between the Years 3&4 game and the Years 5&6 game. We played with 4 strikers and 2 defenders, which meant the defenders needed to ensure that the opposition strikers where well marked. Player of the Day was Daniel Chen for good goalkeeping and accurate throwing. The final score was 18-0 to the Warriors.

This was a semi-final game and a real nail biter. We only had 7 players which meant having to make a lot of positional changes. By half time we were 3 points behind at 0-3, and while we had shots at goal we weren’t able to convert them into points. The final score was a draw at 4-4 which was a great comeback! The whole team played superbly with each player owning their position. The outcome for next week’s finals will be based on a points differential. By my calculations both teams have 21 points, however the Marlins have won 5 games and drawn 1, whereas the Swordfish have won 3 and lost 3. Hopefully we march on to the finals. Players of the Day were Daniel Vaudrey for drawing the opposition defender and creating space while in strike, and Mikayla Easton for great defence and generating at least one penalty from the opposition.

On Sunday, September 8th the Warriors started well and the team worked well together, especially in the second half. The score was 12-0 to the Warriors.  Player of the Day was Aston Carter for getting into open space and creating shots.

On Sunday, September 8th the Marlin’s team started slowly with some errors in defence leading to a few early goals for Silverdale Swordfish.  Some great work by Anna and better marking by defence saw the scores at 3-4 going into the 2nd half. Accurate goal shooting from Alex, Anna and Sam saw the team take the lead in the 2nd half. Good team performance saw the Marlins win the game 7-5.

The Warriors won this game by default.

It was an interesting game, with the coach (me) questioning some of the referees decisions which ultimately escalated taking some of the shine off a very good game. The Marlins played extremely well, probably the best I have seen. The strikers were in position, the communicated well and scored goals. The defenders worked hard and should have earned more penalties. They did exactly what they were supposed to do and kept the opposition out of our danger zone. Both strikers and defenders played extremely well. Players of the Day were Sam Carrigan for always being in position, chasing the ball and scoring goals and to Yolanda Guo for excellent defence and keeping the opposition out of her zone all the time. The final score was 10-3 to Wentworth. Well done.

This week we had a cross over game, which means we played each other. Both the Years 3&4 and Years 5&6 teams were mixed up with players from both year groups competing against each other. I wanted it to be a fun game and my expectations were met. The teams weren’t exactly equal with 8 players in one team and 9 players in the other team, but no-one seemed to mind and everyone had fun. While no score was kept it was good to award the Player of the Day trophies. Ben Rist was given Player of the Day for the Blue Team. Ben played hard, but equally important he communicated well and was always looking for his other strikers. Chloe Chisholm was Player of Day for the White Team for coming up to defend against the opposition strikers and passing to her goal keeper.

Our Years 5 & 6 Warriors played the Red Beach Rays on Sunday 18th August.  This was a convincing win and a whole team effort. Our defenders consistently pushed the opposition out of our red zone and maintained a solid wall that proved very difficult for the opposition to breach. Our strikers worked hard and competed against virtually two goalies. However, they communicated very well and were able to draw opposition defenders and create shooting opportunities. The final score was 13-1. Players of the Day go to Eli Kirkpatrick and Ollie Lee for excellent communication and intelligent positional play. 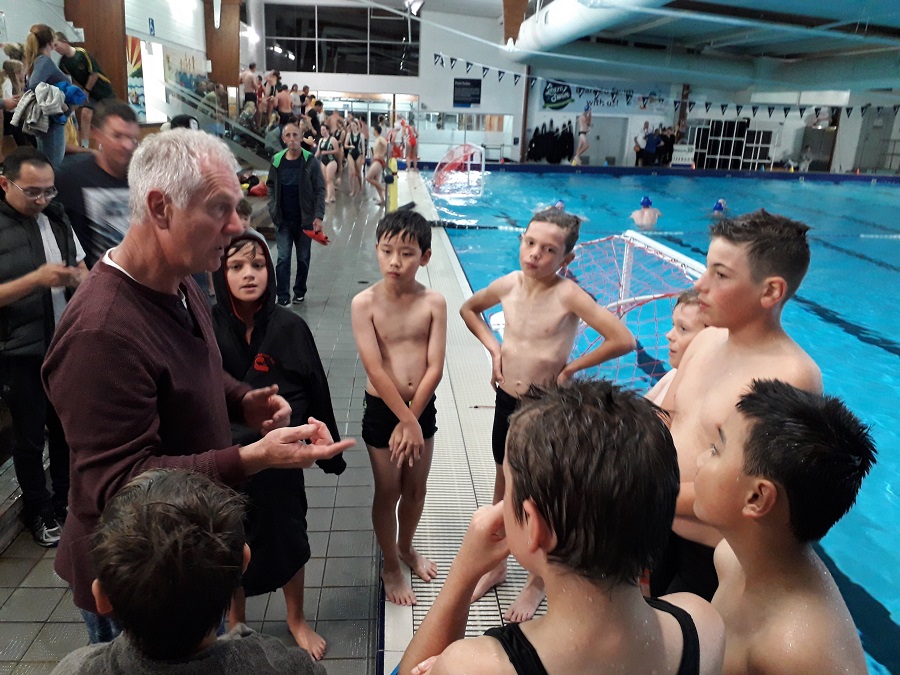 Our Years 3 & 4 Marlins team played a great game on Sunday 18th August against the Gulf Harbour School Finns.
It’s great to see that some of our combinations are starting to work, with players marking their zone and strikers swimming with the ball. A couple more games should see the players used to the changes and the expectations. We played a good game today with solid defence and attack. The final score was 9-3, with Players of the Day going to Norah Li for excellent goal defence and accurate throwing, and Elsa Liu for outstanding defence and forcing the opposition players backwards. 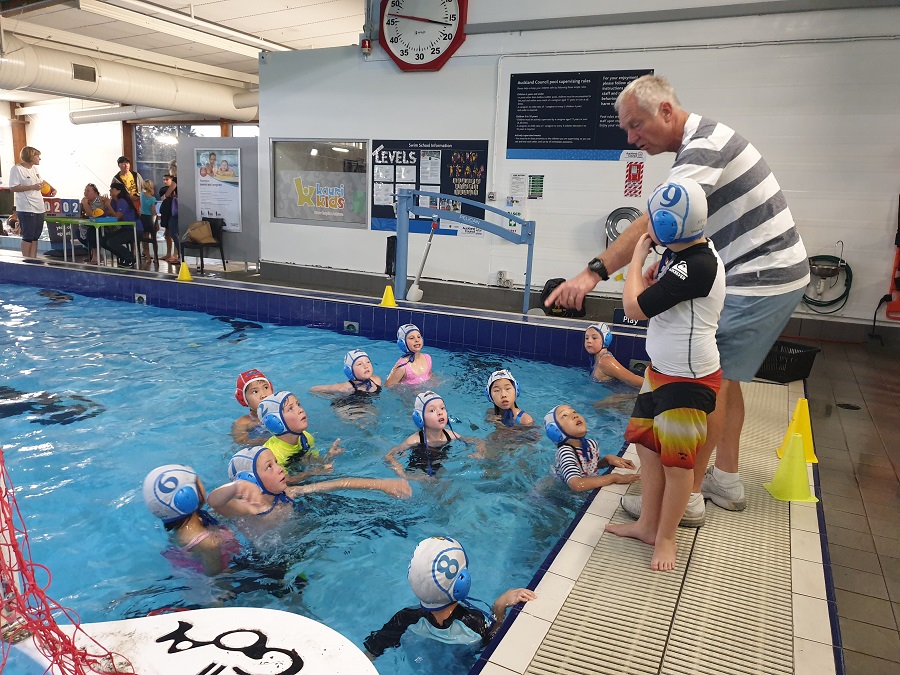 This was a game of two halves for our Years 3 & 4 Marlins against Gulf Harbour School Tiger Sharks on Sunday 11th August. We were down 4-0 in the first half, and while we had plenty of opportunities to score our strikers seemed to be rushing shots and taking shots from outside their throwing range. The second half saw a good turnaround with our defenders being more forceful and the strikers being more patient. The final score was 4-4. Player of the Day went to Alex Krehl for more accurate striking and positional play, particularly in the second half.